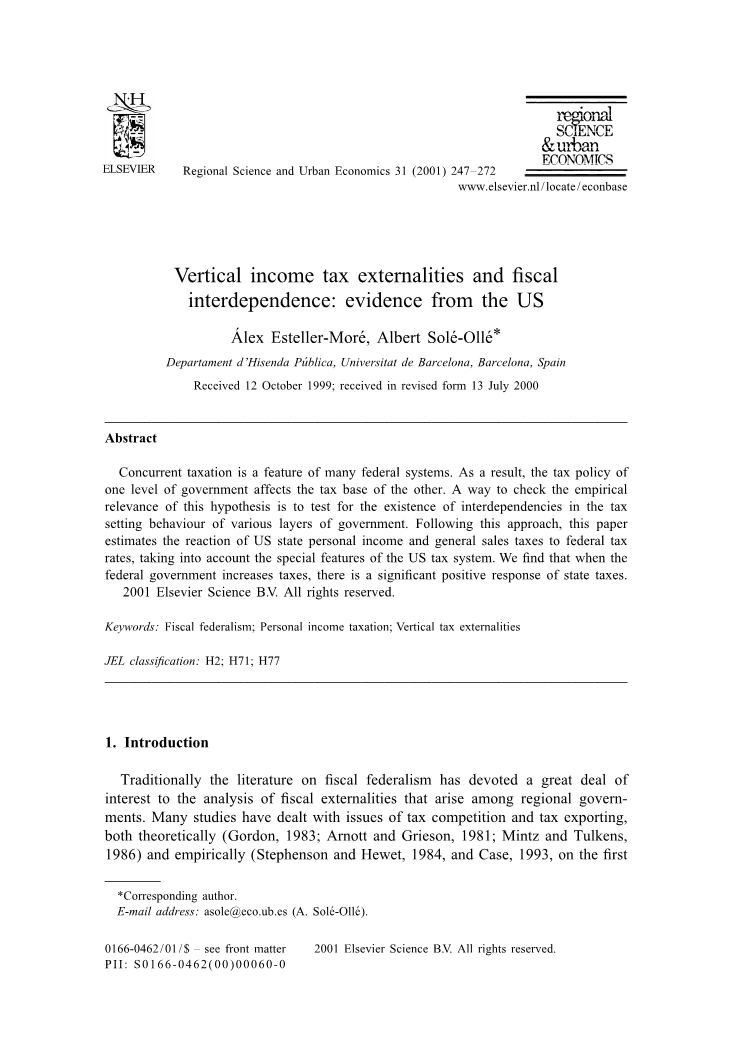 Vertical income tax externalities and fiscal interdependence: evidence from the US

Concurrent taxation is a feature of many federal systems. As a result, the tax policy of one level of government affects the tax base of the other. A way to check the empirical relevance of this hypothesis is to test for the existence of interdependencies in the tax setting behaviour of various layers of government. Following this approach, this paper estimates the reaction of US state personal income and general sales taxes to federal tax rates, taking into account the special features of the US tax system. We find that when the federal government increases taxes, there is a significant positive response of state taxes.  2001 Elsevier Science B.V. All rights reserved.

Traditionally the literature on fiscal federalism has devoted a great deal of interest to the analysis of fiscal externalities that arise among regional governments. Many studies have dealt with issues of tax competition and tax exporting, both theoretically (Gordon, 1983; Arnott and Grieson, 1981; Mintz and Tulkens, 1986) and empirically (Stephenson and Hewet, 1984, and Case, 1993, on the firsttopic, and Bird and Slack, 1983, and Hogan and Shelton, 1973, on the second). Other studies have focused on the relevance of expenditure spillovers among neighbouring regional governments (Case et al., 1993). However, as Keen (1998) pointed out in a recent survey, the relevance of externalities between levels of government also has to be recognised. In a federal setting, characterised by the existence of a federal government and many regional governments, it is quite possible that the policy decisions of one level of government will affect the policy outcomes at the other level. If both levels ignore such policy externalities, the resulting decentralised policy decisions may be socially sub-optimal. These vertical spillovers can arise both on the expenditure side of the budget (Dahlby and Wilson, 1997), and in tax-setting situations. This paper will deal with the latter topic.

Vertical externalities in the design of tax policy arise mainly as a result of concurrent taxation. In many federal countries, some tax bases are the joint property of the federal and regional levels of government. That is, both levels of government have the capacity to change fundamental tax parameters on the same base. It has to be stressed that tax-sharing arrangements – that is, when the regional government is entitled to a share of the revenues raised in its territorial jurisdiction – do not conform to what we mean by lsquo;concurrent taxationrsquo;. Taxsharing is a necessary but not sufficient condition for our definition of concurrent taxation; what is in fact necessary is that both levels of government share tax powers regarding that base. In this case, the tax rate (or other parameters of the tax that define the tax burden) set by one level of government affects the revenues raised by the other. Of course, for this vertical tax spillover to arise the tax base has to be responsive to tax rate changes; that is, the tax has to be distortionary. In this setting, if each level of government ignores the effects its tax policies have on the revenues of the other level of government, the tax rates will be too high.

The interest of public finance scholars in the tax spillovers arising from concurrent taxation is very recent. Traditionally, analysts have stressed certain administrative problems related to the joint property of tax bases. Musgrave (1983) and Break (1980) worried about the higher compliance and administrative costs that a taxing arrangement of this kind among levels of government generates, and Tanzi (1995) and Bordignon et al. (1996) emphasised the moral hazard problems appearing when different levels of governments collect joint taxes. Nevertheless, the first papers dealing with vertical externalities caused by uncoordinated distortionary taxation were those of Flowers (1986) and Johnson (1988). More recently, Wagoner (1995), Wrede (1996), Boadway and Keen (1996), Dahlby (1996), Boadway et al. (1997), and Sato (1997) have also addressed this issue.

There are three papers that have sought to quantify the magnitude of the tax interdependence among levels of government: Besley and Rosen (1998), Goodspeed (2000) and Boadway and Hayashi (2000). The analysis of Besley and Rosen (1998) deals with spillovers in gasoline and cigarettes tax setting, and uses US data for the period 1975–89. They find that when the federal government increases its taxes there is a significant response of state taxes, confirming the vertical externality hypothesis. The article by Goodspeed (2000) focuses on income taxation and uses a panel of data from 10 OECD countries during the period 1975–84. He finds a negative relationship between federal and regional tax rates. The paper by Boadway and Hayashi (2000) analyses vertical and horizontal externalities in business taxation using a panel of data for Canada during the period 1963–96. They model the behaviour of the Canadian federal government, of the two biggest provincial governments (Ontario and Quebec) and of the aggregate of the other provinces. The main findings are a negative reaction of provincial taxes to the federal tax, and a positive reaction of the federal tax only to Ontariorsquo;s tax policies.

As we will discuss in the theoretical section, these contrasting results – i.e., different sign and size of the reaction – are consistent with the ambiguity of the theoretical predictions, but may also be due to differences in the taxes analysed or to differences in the federal institutional context in which tax decisions are made. We think that further empirical analysis of this kind is needed to clarify these issues. In particular, we need to know more about vertical externalities in lsquo;first classrsquo; taxes, such as the personal income tax, controlling for the institutional