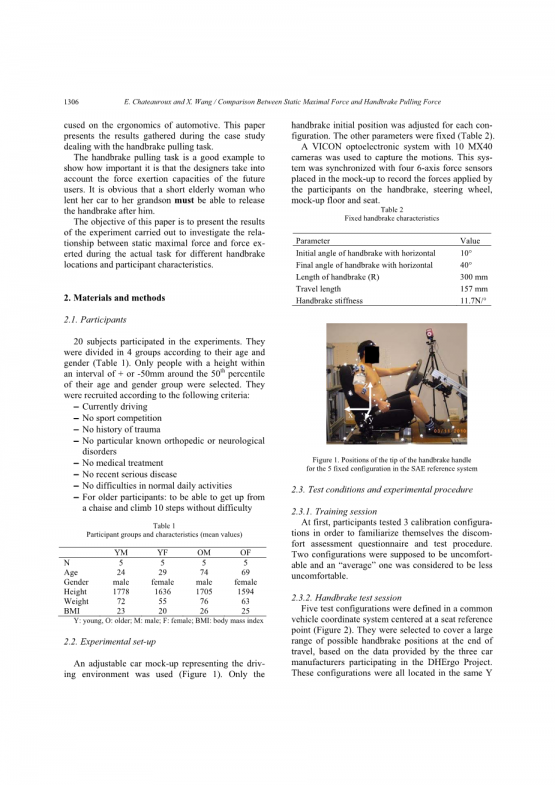 Abstract: The measurement of maximum pulling force is important not only for specifying force limit of industrial workers but also for designing controls requiring high force. This paper presents a comparison between maximal static handbrake pulling force (FST) and force exerted during normal handbrake pulling task (FDY). These forces were measured for different handle locations and subject characteristics. Participants were asked to pull a handbrake on an adjustable car mock-up as they would do when parking their own car, then to exert a force as high as possible on the pulled handbrake. Hand pulling forces were measured using a six-axes force sensor. 5 fixed handbrake positions were tested as well as a neutral handbrake position defined by the subject. FST and FDY were significantly correlated. Both were found to be dependent on handbrake position, age and gender. As expected, women and older subjects exerted lower forces. FST was significantly higher than FDY. The ratio FmR (FDY divided by FST) was also analyzed. Women showed higher FmR than men meaning that the task required a higher amount of muscle capability for women. FmR was also influenced by handbrake location. These data will be useful for handbrake design.

The measurement of maximum pulling force is important not only for specifying force limit of industrial workers but also for designing controls requiring high force. When designing a control like handbrake, engineers have to take into account the functional capacities of the target population of users. Users, such as elderly, women, children, or handicapped people, should be able to operate, use or manipulate a control that is designed for them. It is well known that physical strength varies widely among individuals. A product should be designed such that the weaker people are able to use it safely and comfortably whereas the stronger users can interact with the product without damaging it .

Many studies have shown that the maximal force producing capability varies considerably between people and between tasks [1]. As a consequence, predicting the force exertion capacities of a target population for a given task requires extensive force measurements. This is why Daams proposed to build up an “Atlas of Human Force Exertion” in order to guide designers.

On the other hand, Digital Human Models are more and more used to assess the ergonomics of a product during the early stage of the product design. However, the DHM ability to assess dynamic motions is still a requirement of car manufacturers [8]. It is important to implement force exertion capacities into the DHM tools to provide the designer with efficient models. Due to the large variability in the human capacities and behaviors and the complexity of the musculo skeletal system, we have proposed a pragmatic data-based approach which allows the prediction of variation range of hand and foot maximum force on a control for DHM applications [9]. This study was carried out within the framework of the European project DHErgo. This project aimed to develop digital human models and to collect human functional data for a better evaluation of a product at its early stage of design. This project was focused on the ergonomics of automotive. This paper presents the results gathered during the case study dealing with the handbrake pulling task.

The handbrake pulling task is a good example to show how important it is that the designers take into account the force exertion capacities of the future users. It is obvious that a short elderly woman who lent her car to her grandson must be able to release the handbrake after him.

The objective of this paper is to present the results of the experiment carried out to investigate the relationship between static maximal force and force exerted during the actual task for different handbrake locations and participant characteristics.

-No history of trauma

-No difficulties in normal daily activities

-For older participants: to be able to get up from a chaise and climb 10 steps without difficulty Table

An adjustable car mock-up representing the driving environment was used (Figure 1). Only the handbrake initial position was adjusted for each configuration. The other parameters were fixed.

A VICON optoelectronic system with 10 MX40 cameras was used to capture the motions. This system was synchronized with four 6-axis force sensors placed in the mock-up to record the forces applied by the participants on the handbrake, steering wheel, mock-up floor and seat.

At first, participants tested 3 calibration configurations in order to familiarize themselves the discomfort assessment questionnaire and test procedure. Two configurations were supposed to be uncomfortable and an “average” one was considered to be less uncomfortable.