1.An Efficient Face Recognition Algorithm Based on Deep Learning for Unmanned Supermarket

As one of the most important biometric identification technology, face recognition has many advantages such as directness, friendliness, convenience, good interaction, and especially no physical contact. The traditional one is based on the geometric features of face, then subspace, local features, etc. Among them deep learning has continued to heat up in the academic and industrial worlds and has made breakthroughs in speech recognition, image recognition, and natural language processing. The deep learning model has achieved very large performance enhancements on large-scale image classification tasks. Face recognition Algorithms using CNN in the field of deep learning have been improved compared with the traditional ones in terms of recognition accuracy, anti-interference ability and the speediness of identification.

The algorithm of this paper first uses part of the face data to perform data enhancement using convolutional motion blurring operators. Then the CNN consists 4 convolutional layers. The first three convolutional layers each have a pooling layer behind them using maximum pooling. The first fully connect layer uses the idea of DeepID to connect to the last convolutional layer and the third pooling layer at the same time. The last fully connect layer is the distribution of learning classes, with the same dimensions as learned categories. When face recognition is performed after the model is trained well, the algorithm first runs face classification. It#39;s a gender classification algorithm in this paper, and then finds faces in the corresponding classification to match. The structure of this algorithm is as follows.

One of a most popular examples of machine learning in the recent times has been those based on deep learning, otherwise known as Convolutional Neural Networks (CNNs), the use of which has been literary explosive in the area of visual computing. In fact, the exploitation of CNN s for face processing and face recognition is noteworthy here. CNN s are supervised machine learning techniques that can extract “deep” knowledge from a dataset through rigorous example based training - in a sense this approach mimics how human brain undertake the process of learning. CNN s have been successfully applied to feature extraction, face recognition, classification, and segmentation, to name some. As noted here, the explosion on the use of CNN s in recent times is due to their ability to learn complex features using nonlinear multi-layered architectures [17]. Though the origin of CNN goes back to the early 1990s, the predominant scepticism for using CNN has been based on the assumption that feature extraction using gradient descent will always overfit. The main argument for this has been that gradient based optimisation methods are prone to get stuck in local minima. However, in recent times, these assumptions have been overturned due to the promising results CNNs have produced across many domains of research. Thus, today, state-of-the-art deep learned models, based on CNN architectures are being used in almost all visual computing related domains. Examples include image perception [18], recognition [19], classification , and information retrieval .

The main contribution of this paper is to obtain a powerful recognition algorithm with high accuracy. In this paper, we developed a new CNN architecture by adding Batch Normalization process after two different layers.

CNNs are a category of Neural Networks that have proven very effective in areas such as image recognition and classification. CNNs are a type of feed-forward neural networks made up of many layers. CNNs consist of filters or kernels or neurons that have learnable weights or parameters and biases. Each filter takes some inputs, performs convolution and optionally follows it with a non-linearity[41]. A typical CNN architecture can be seen as shown in Fig. 1. The structure of CNN contains Convolutional, pooling, Rectified Linear Unit (ReLU), and Fully Connected layers.

Convolutional layer performs the core building block of a Convolutional Network that does most of the computational heavy lifting. The primary purpose of Convolution layer is to extract features from the input data which is an image. Convolution preserves the spatial relationship between pixels by learning image features using small squares of input image. The input image is convoluted by employing a set of learnable neurons. This produces a feature map or activation map in the output image and after that the feature maps are fed as input data to the next convolutional layer.

Pooling layer reduces the dimensionality of each activation map but continues to have the most important information. The input images are divided into a set of non-overlapping rectangles. Each region is down-sampled by a non-linear operation such as average or maximum. This layer achieves better generalization, faster convergence, robust to translation and distortion and is usually placed between convolutional layers.

ReLU is a non-linear operation and includes units employing the rectifier. It is an element wise operation that means it is applied per pixel and reconstitutes all negative values in the feature map by zero. In order to understand how the ReLU operates, we assume that there is a neuron input given as x and from that the rectifier is defined as f(x)=max(0,x) in the literature for neural networks. 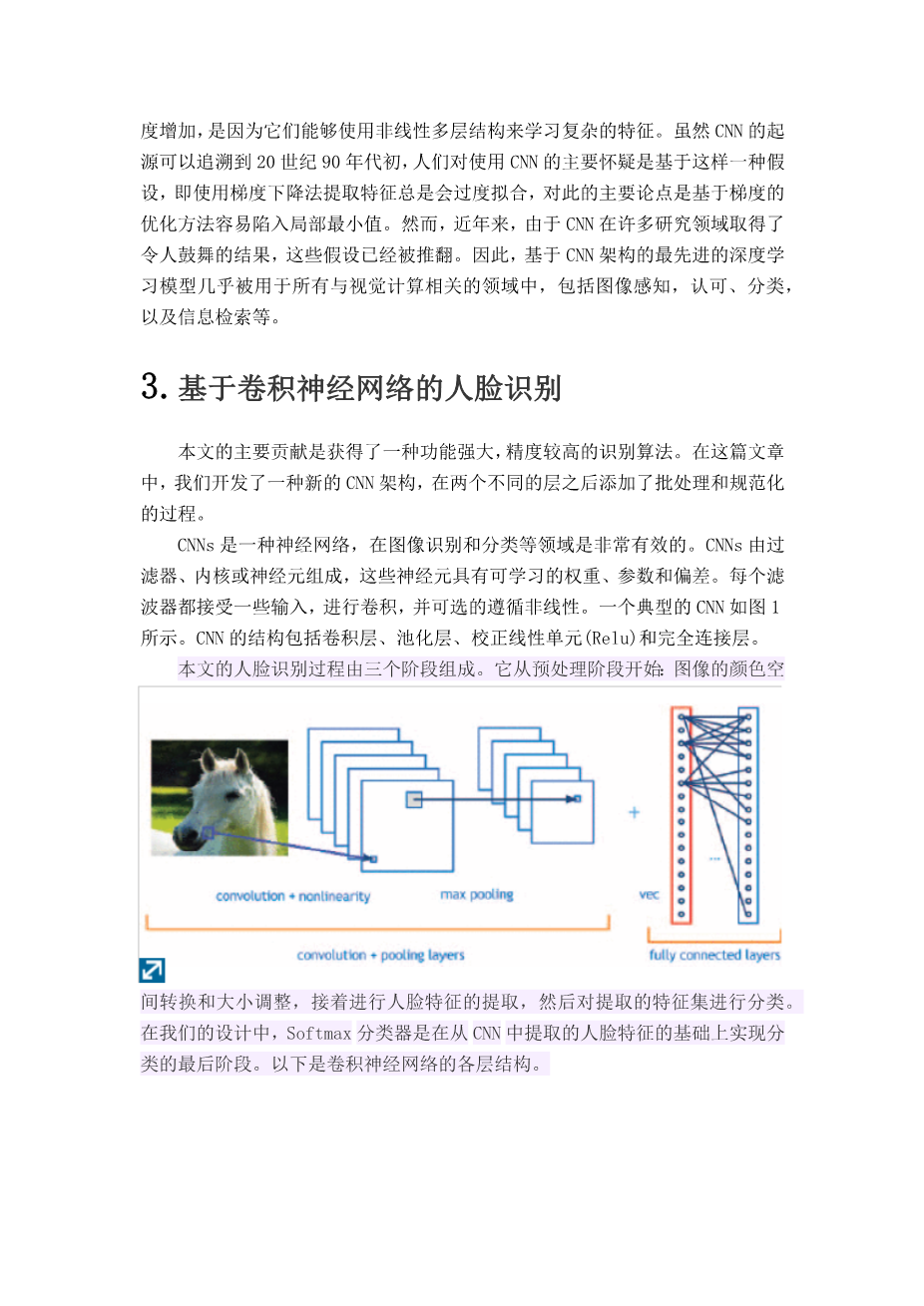