Geochemical prospecting may be defined as the process of systematically analyzing the chemical content of rock, soil, stream sediments, plants, water, or air samples to detect anomalous occurrences that it may indicate the existence of ore minerals. Although few ore bodies have been discovered by geochemistry alone, it is a valuable adjunct to direct search by geophysical means Rose et al. (1979, p.7) list a number of important mineral deposits in which geochemical methods played a major part in discovery. Geochemistry, an indirect method, is carried out on the ground and is often used where geologic and geophysical methods have been relatively ineffective. It does not serve as a tool for pinpointing drilling targets in exploration, but it does serve as a useful reconnaissance procedure, particularly for very large areas of remote terrain.

Through systematic collection and precise trace analysis of appropriate samples, geochemical anomalies can be detected. When interpreted properly and integrated with geologic and other data, geochemical analyses are useful in indicating or helping to confirm promising target areas. They have been used on sulfides of copper, lead, zinc, nickel, and molybdenum, and, to a lesser extent, uranium, diamonds, tungsten, tin, mercury, gold, and silver minerals.

The costs of geochemical prospecting activities are a function of the number of samples to be analyzed and the cost of maintaining a geochemical sample collection team in the field. Peters (1987) lists such costs, including general sample preparation costs plus single- and multiple-element analyses of a variety of types. Commercial laboratory analysis rates and the cost data (Peters 1987) indicate that geochemical analyses have the following costs.

FIGURE 3.3 Examples of airborne electromagnetic installations and configurations. (Klein and Lajoie, 1992; by permission of the Northwest Mining Association, Spokane, WA.)

Sample preparation: $1 to $10 per sample, depending on the steps required

Gold or silver analyses: $3 to $30 per sample, depending on the method used

Single-element geochemistry: $3 to $25 per sample, depending on the element

Trace element geochemistry: $7 to $28 per sample, for up to 30 elements

Note that the different methods have different detection limits on the various elements, and that the proper method must he chosen to be most effective on a cost basis. Also note that the cost of putting a field crew on the job of collecting the samples is in addition to the analysis costs.

Geobotanical prospecting is the science of employing the changes in the patterns of vegetation growth in an area as a visual or analytical guide to mineralization (Brooks, 1995). Although inexact and only an indicator, geobotany can nonetheless be used to detect areas of the ground surface where minerals have affected the characteristics of plant species. There are recognized species that grow in conjunction with ore deposits, and there are plants that change their growing characteristics when located in the vicinity of certain ore minerals. These relationships can help pinpoint the presence of mineral deposits. One of the important applications of remote sensing is in the detection of patterns in botanical systems that may indicate differences in the geologic hosts for the plants (Gupta, 1991; Brooks, 1995).

In recent years other biological systems have shown promise in helping to detect mineral anomalies. Geozoological, geomicrobiological, and biogeochemical prospecting methods have been outlined by Brooks et al. (1995). These methods all use measurements of one or more biological Systems to evaluate the state of the ground surface and to help in the discovery of valuable mineral deposits. The methods are not very likely to be used today, but scientific developments may make them more useful in the future.

If the goal of prospecting is to locate anomalies due to mineral deposits then the goal of exploration is to define and evaluate them. As mentioned in Section 1.4, exploration determines the geometry extent and worth of an ore deposit using techniques similar to, but more precise than, those used in prospecting. As Stage 2 in the life of a mine, exploration continues the mining attempt through the tactical phases of detailed appraisal and evaluation culminating in preparation of a feasibility report that either accepts or rejects the deposit(s) for further consideration. Exploration normally involves both geology and geophysics, but geochemistry and geobotany may have little utility beyond Phase 2. The distinct differences between prospecting and exploration are as follows:

1. Locales. As the search area decreases and the favorability of the targets improves the locale shifts from air (or space) to the ground and subsurface locations. Airborne geophysics is normally replaced by ground-based geophysics, geology is increasingly subsurface oriented and additional subsurface exploration techniques are utilized.

2. Physical samples. As the site shifts from surface to underground, indirect methods are replaced by direct methods to provide data. Because most ore bodies today are hidden, subsurface excavation methods to obtain actual mineral samples must be employed. The most commonly used is drilling.

3. Data. To diminish risk during the exploration stage, much more substantial data about the target are required. The data are characterized by greater precision. Specificity and certainty.

Generally, the progression of steps in exploration is as follows. First, the favorable area identified by prospecting must be delineated by exploration techniques. Second, once located, the mineral deposit is sampled thoroughly and i 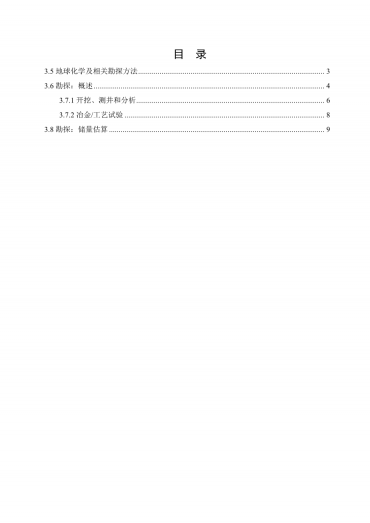